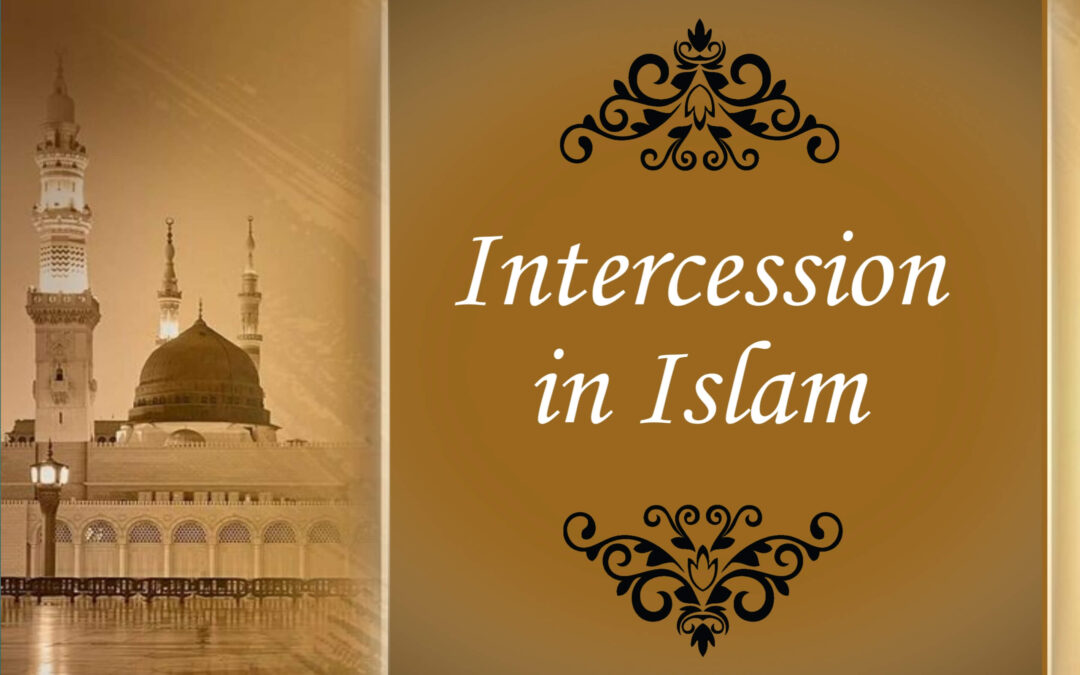 The origin of word ‘’Shafaah’’ (intercession) is ‘’shaf’’ which means “to combine two things alike.” This means the help by the authoritative for the weak ones or in other words to recommend in the form of request or supplication. The intercessor in Arabic is called شَفِیعٌ “Shafee“ and for whom intercession is recommended is called مَشفُوع“Mashfoo.’’

The mediation or recommendation of any Prophet, Saint or an Angel for the forgiveness and pardon of a sinful person on the Day of Judgment refers to intercession.

Al-Raghib al-Asfahani writes about intercession: “Combining one thing with another in such a way that the other thing helps him and the first one asks him, that is intercession.” He further writes: ‘’The word “intercession” is usually used to associate a person of higher rank with a person of a lower rank.’’ (Al-Mufradat fi Gharib al-Quran)

In common parlance, intercession means that the intercessor, utilising his personality and influence, changes the view of the powerful and authoritative person about the punishment of his subordinates. Similarly, to use one’s influence with respect or when people are afraid of it or to influence someone through favours or to change the ideological basis regarding the sin of a criminal and his right to punishment etc.

Intercession for the Muslim Umma

Intercession is a means of reforming, awakening and guiding the sinners and wrongdoers. It is the truth and Divine light of Oneness of Allah. The intercession for Muslim Umma is due to the grace of Allah. He sent His glorious, majestic and exalted messenger Prophet Mohammad (pbuh) who holds the position of ‘’Beloved.’’ Prophet Mohammad (pbuh) is a medium for the sinners and wrongdoers to the Paradise who deserve the punishment of Hell on the Day of Judgement.

This is one of the basic beliefs. On the Day of Judgment, when panic and fear will be prevalent, the words of the Holy Prophet (pbuh) یاربی امتی یا ربی امتی (O Lord! My Umma, O Lord! My Umma). Allah will grant the highest position of praiseworthy ‘’Maqam-e-Mehmood’’ to the Prophet (pbuh) and would accept his will.

Intercession in Light of Quran

The above verses prove that on the Day of Resurrection, Allah will bestow upon His beloved Prophet (pbuh) the honour of superior intercessor.

Denial for Intercession is for Non-Muslims

Some ignorant and unaware people deny intercession from a worldly point of view. Denial for intercession is mentioned in Holy Quran for disbelievers and polytheists only, as the Almighty has said:

Intercession in Light of Hadiths

This refers to intercession in the world which has been interpreted as ‘’recommendation.’’ Allah says in Quran:

The above verse proves that good intercession in the world will reward well and wrong and bad one will result in punishment. The Quran has clarified both the cases. Therefore, denying the right recommendation on the basis of wrong recommendation is against justice.

2.    Intercession in the Hereafter:

Your Lord will certainly raise you to a station of praise and glory (i.e., the glorious station of intercession where all the former and later generations will turn towards you and glorify you). [17:79]

Explanation: The Beloved Prophet Mohammad (pbuh) will have the highest ‘’Maqam-e-Mahmood’’ (the glorious station of intercession) on the Day of Judgement. He will exercise wide authority and will hide the sins and wrongdoings of sinners.

All the prophets except the Holy Prophet (pbuh), saints, sages, scholars and martyrs will have inferior intercession. They will intercede according to their rank and status.

There are four conditions for intercession in the Hereafter:

The intercessor should have the power and authority over intercession. If someone has no authority to intercede, then he cannot intercede. Almighty Allah says:

(On that day) people will not possess the authority to intercede, except those who have taken the promise (of intercession) from the Most Kind (Lord). [19:87]

The acceptance of intercession depends on the permission to intercede by Allah.

Who can dare intercede with Him except by His permission? [2:255]

There is no one to intercede (with Him) without His permission. [10:3]

There are two levels of intercession.

Allah has already given the permission of intercession to His chosen ones in this world. On the Day of Judgement, when there will be no opportunity for anyone to speak before the glory and majesty of Allah, then only those will speak whom Allah will give permission.

Being a Muslim is a condition for intercession. Wherever intercession is denied in the Holy Quran, it refers to infidels and polytheists. Intercession has not been denied to the believers in any place.

According to the fourth condition of intercession, may Allah be pleased with the one who is to be interceded for. His intercession is not possible without Divine will. Allah says in Quran:

And they do not intercede (before His presence) but for him with whom He is pleased. [21:28]

We believe that on the Day of Judgement, the Prophets, Imams and Saints will intercede for the sinners with the permission of Allah and they will be blessed by God. Remember that this permission is only for those who have maintained their connection with Allah and His saints. Therefore, intercession is conditional. It also has something to do with our intentions and actions. (Shifat ka Bayan, Muhammad Iqbal Kalani)

On the Day of Judgement, intercession would not be for everyone. It would be according to the will of Allah Almighty, which is part of the deeds which God Almighty has declared as means of intercession.

For example, if a Muslim committed negligence in discharging their obligations and on the other hand, in his worldly life, he had been a sincere friend of Allah’s Messenger (pbuh) and the People of Cloak. He had respected a scholar of (soul of) Islam or had done good deeds with a pious believer who later attained the status of martyrdom. Allah Almighty will also reward him for this heartfelt love and practical action. On the contrary, the effects of bad deeds and sins destroy the reward of good deeds.

There are three aspects to the station of intercession that Allah will grant to His close ones:

The highest rank among human beings is that of the Prophets, then the righteous, believers and common believers. From the beginning of creation to eternity, the highest and most elevated status, honour and respect has been given to our lord and master, Prophet Mohammad (pbuh). On the Day of Judgement, he (pbuh) will be given the ‘’Maqam-e-Mahmood’’ (the glorious station of intercession). Whereas, apart from our Prophet (pbuh), other prophets, the righteous ones and believers will also intercede according to their ranks.

On the Day of Resurrection, Allah Almighty will give a flag to every prophet under which his umma will gather.

After the intercession of the Holy Prophet (pbuh), other prophets, angels and believers will intercede. The reason why the prophets and the righteous will intercede is because Allah has bestowed upon His chosen ones the right and exalted position. Allah cares for His close and beloved servants. This is His special grace and blessings.

The glory of the beloved ones of Allah is that He accepts their supplication and fulfills what they have sworn. Allah Almighty bestows His love, blessings and kindness on them.

The Prophets, righteous, believers and pious will intercede before Allah on the Day of Judgement for the forgiveness of the sinners. The intercession will be due to their status and honour which Allah has given them. He has raised them above other creatures and made them close to Him. And the intercession of these close ones is only with the permission and support of Allah. (Kitab-ul-Shifaa, Dr Tahir-ul-Qadri)

Seeking means is to adopt the company of beloved of Allah to attain His proximity. The medium of prophets, saints, righteous and martyrs is essential. They will intercede for us on the Day of Resurrection with the permission of Allah. Jihad in the way of Allah means to fight against His exoteric and esoteric enemies for His sake. The exoteric enemies are the disbelievers and polytheists who are deniers of Allah, deniers of the Prophet (pbuh) and disobedient to Allah and who cause mischief. The esoteric enemy of Allah is Iblis (leader of devils) who uses innerself and the world to astray mankind.

The Holy Prophet (pbuh) has declared war (Jihad) again the innerself (nafs) as ‘’Jihad-e-Akbar’’ (Greatest war against innerself to purify it). When the innerself gets rid of all (spiritual) diseases and idols, it becomes pure. (Purification of Innerself in Sufism)

Al-Hasan al-Basri says that opposing the desires of the innerself is best Jihad.

Sultan-ul-Ashiqeen Sultan Mohammad Najib-ur-Rehman is the esoteric and superior spiritual successor of the Holy Prophet (pbuh) in the present age. He is the medium of intercession for the seekers of Allah in this world and in the hereafter. May Allah Almighty help the entire Muslim Umma to understand the concept of intercession. May He keep us safe from esoteric divisions and disunity. Ameen

This blog is an English translation of the Urdu article شفاعت which appeared in December 2021 edition of the Mahnama Sultan-ul-Faqr Magazine, Lahore. Dr Mohammad Waseem Akram Sarwari Qadri has translated it in English as ‘’Intercession in Islam.’’ Intercession is a position and honour of supplication by Allah to His special ones that they will intercede for sinful servants. The intercession of the Muslim Umma is due to the great grace of Allah. He has sent His glorious, majestic and exalted messenger, Prophet Mohammad (pbuh) who holds the position of ‘’Beloved.’’ Prophet Mohammad (pbuh) is a medium for the sinners and wrongdoers to the Paradise who deserve punishment of hell on the Day of Judgement.

What are the different types of intercession?

The intercession in the Hereafter has further two types:

Who are the intercessors according to Quran and Hadith?

Allah says in Quran: •     On that Day, no intercession shall be fruitful except his (intercession) whom the Most Kind (Lord) has granted leave (and permission and with whose word He is pleased (such as Prophets and Messengers, Allah’s chosen and pious servants, Godwary slaves, innocent children, and many other devoted servants of Allah whose intercession is validated).  [20:109]

Abdullah ibn Umar narrated that on the Day of Judgement people will follow their Prophet in groups and will say: Intercede for us ‘’O’ so and so! Intercede for us.’’ Finally, the chain of intercession will come to an end with the Holy Prophet (pbuh). This is the day when Allah Almighty will grant him ‘’Maqam-e-Mahmood’’ (the glorious station of intercession). (Sahih al-Bukhari – Kitab al-Tafsir)

Who will benefit from the intercession on the Day of Judgement?

All Muslims whom Allah is pleased with and whom have followed the Holy Prophet (pbuh), the People of Cloak and the Sufi Saints wholeheartedly with sincerity of intention and love will benefit from the intercession of Prophet Mohammad (pbuh).

Allah says in Quran: Your Lord will certainly raise you to a station of praise and glory ‘’Maqam-e-Mehmood’’ (i.e., the glorious station of intercession where all the former and later generations will turn towards you and glorify you). [17:79]

What is the importance of the perfect spiritual guide in intercession?

Who is the perfect spiritual guide in present era?

Sultan-ul-Ashiqeen Sultan Mohammad Najib-ur-Rehman is the esoteric and superior spiritual successor of Holy Prophet (pbuh) in present era. He is the perfect spiritual guide of Sarwari Qadri Order and the Universal Divine Man of this era. Read more: