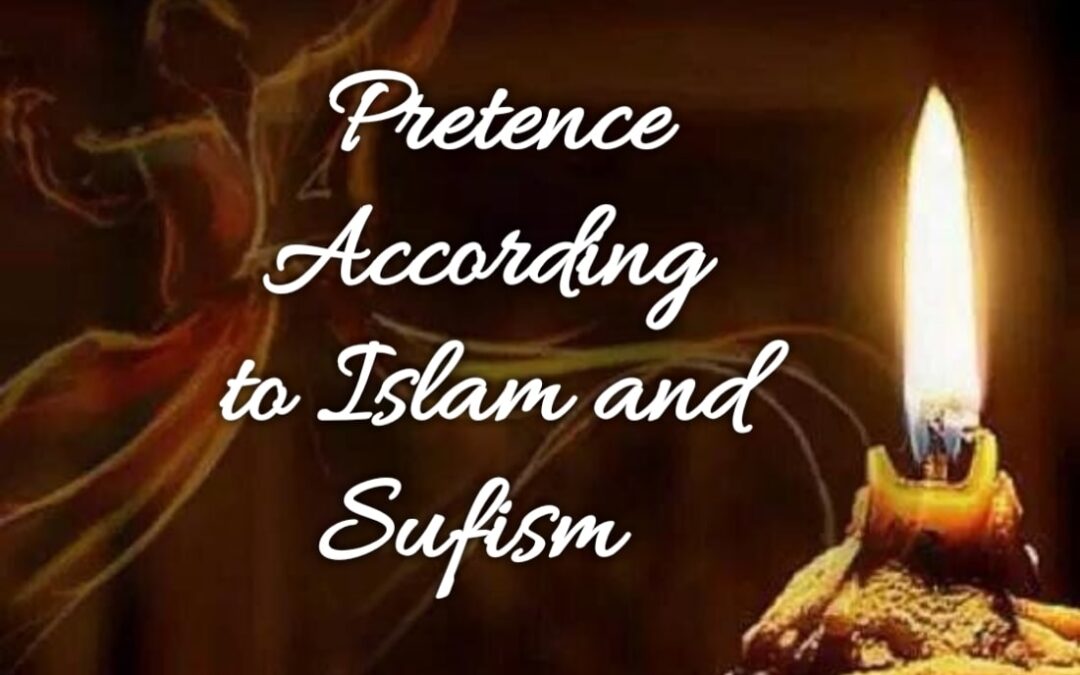 What does pretence mean?

The literal meaning of pretence is to show off. Good deeds are performed not for Allah’s will rather just for show off is also referred to as pretence. The aim of worship is to please Allah in order to achieve His closeness and gnosis. Hence all virtues must be done purely for Allah. If this aim of worship is polluted with worldly benefits then surely good deeds are not for Allah rather just a pretence.

There are two levels of pretence.

What is the root of pretence?

In this era everyone wants to be apparently ahead of others. This behaviour has reached such extreme level that worship which is only done for Allah has been polluted by pretence and hypocrisy. The only priority of an ordinary Muslim is material needs ad luxuries. He does not even try to understand the spiritual knowledge and reality of worship.

Though an ordinary Muslim spends his wealth according to Divine commandments, but as he does not care about the pleasure of Allah, so he falls into the trap of hypocrisy. This includes in particular the charities, donations, alms and Eid al-Adha sacrifices. For example, instead of pleasing Allah when buying sacrificial animal, people and relatives are taken into consideration like what will they say if we don’t sacrifice more animals? The sacrificial animal is used as an advertisement. Thus, where there is no possibility of fame in financial support no expenditure is made. However where fame is gained and admired from all sides, pictures are being taken, recordings are being made, it is easy for a hypocrite to spend in this place. Even sometimes large sums of money are announced in front of big gatherings and no money is sent later. All of this is pretence.

Pretence according to Quran

According to Holy Quran it is an extremely weak sign of faith to spend money for show off.

And those who spend their wealth to show off to people, and believe neither in Allah nor in the Last Day. And whoever Satan sides with as a companion, so he is an evil companion! (4:38)

(On the day of judgement) When the people come to account for what they used to do, the hypocrites will be told to go to those for whom they used to be hypocrites, and seek from them their reward. (Al Mu’jam Al Kabir Hadith 4301)

Indeed, there is a valley in Hell from which Hell seeks refuge four hundred times a day. Allah has prepared this valley for the hypocrites of the Mohammadan umma who will be the memorisers of the Holy Quran, the ones you give alms for other than Allah, the pilgrims of Allah’s house and those who go out in the way of Allah (but because of pretence their deeds will be in vain and will not benefit them at all). (Al Mu’jam Al Kabir)

Whoever pretends with Allah for other than Allah, indeed, he has been absolved of Allah’s grace. (Al Mu’jam Al Kabir 805)

Pretence is worse than Infidelity

Sultan Bahoo says in his book Mehak ul Faqr Kalan that the Holy Prophet said, “Pretence is worse than infidelity”.

Shadad ibn Aus said that he came to the Prophet and felt disgust on his face. I was very sad to see that. I said: “O Messenger of Allah! How are you?” The Holy Prophet replied, “I fear that my umma may be polytheists.” I asked, “Will your people become involved in shirk”? He replied: “They will not worship the sun, the moon, idols and stones, but they will show off in deeds and show off is shirk”. (Ghunyat al-Talibeen)

Pretence is the seed of evil.

Do good deeds but do not think of pretence and fame. Whoever does good deeds to show off, then Allah entrusts it to him for whom he has done it.

The hypocrite takes the world in exchange for religion and without qualification dresses like the righteous, speaks like them but does not act like them, claims his intention towards them, this intention is not right but wrong! (Al-Fath ar-Rabbani)

O Muslims! Leave him who acts for popularity among the people, he is an enemy of Allah and a runaway slave, one who disbelieves in Allah and is ungrateful for His blessings. He is rejected and cursed. (Al-Fath ar-Rabbani)

The men of inciting innerself are bitter and resentful with the smell of hypocrisy in their being. (Kaleed-ul-Tauheed Kalan)

Austerity is adopted by some people hypocritically to satisfy the desires of their inciting innerself and to earn respect, fame and inclination from the people. (Kaleed-ul-Tauheed Kalan)

Scholars have given five basic reasons for pretence:

According to the scholars, pretence is more prevalent in the heart of a person who is ignorant. The more ignorant one is, the greater the hypocrisy. When he does not know the greatness of sincerity in the sight of Allah, so he does not think the deed on which he is proud will be accepted or not. He does his best to tell people how much he worships.

Lust for Prominence and power

This means need of prominent place and dominance among people so that their superiority is visible among others.

My beloved spiritual guide Sultan Mohammad Najib-ur-Rehman says: “Desire of fame, reputation, power and prominence means that a person wishes to dominate the people’s heart and lead them.” (Purification of innerself in Sufism)

In this way, man uses worship to win people’s hearts.

Some people have very good nature but they have a weakness that they cannot hear their criticism. So to avoid this, they pretend not to hear anything negative about themselves tend to act in pretence. They think that whatever they are doing will always get popular. Why do we bother with condemnation? The Prophets and the Companions also received criticism. The negative behaviour of people is more important for them as compared to Allah’s will and pleasure. People do not prioritize Allah’s will and pleasure. Even though people only see our deeds whereas Allah sees our intentions.

The desire to accumulate wealth

People show off their deeds in order to gain wealth from people. That is, desire to earn worldly wealth through religion. It involves spiritual healers, liars and imperfect spiritual guides.

Greed for praise and fame

Many people do hypocrisy for approval and to become famous. In this way, they completely forget about the will of Allah. Hypocrites are people of flattering nature, those pursuing illegitimate interests and those who are hiding their shortcomings.

What are the ways of Pretence?

Style of Invocation and conversation

We should not be skeptical of our Muslim brothers after knowing the various methods of pretence. Instead we should look for these forms of hypocrisy in ourselves and focus on our own reformation. When we find out that there are so many calamities and how difficult it is to avoid pretence, it is very much possible that Satan will whisper that you will not do good deeds from scratch and thus avoid hypocrisy. In this regard the scholars say, “It is not wise to give up good deeds out of fear of pretence because in this way we will lose the reward of both sincerity and good deeds, so instead giving up good deeds we must correct our intention. Satan impinges every human being, so man should fight against these evil tricks with hatred, denial and the knowledge of religion.”

Whereas the seeker of Allah with the help of invocation of Ism-e-Allah Zaat fights the devil’s tricks and finally succeeds in defeating him.

Ism-e-Allah Zaat given in Sarwari Qadri order is the best invocation. It is a secret invocation therefore it does not include the element of hypocrisy. But the chain of hypocrisy begins when the seeker, growing in the pursuit of Allah, even outwardly does deeds with perseverance so people start giving him more importance and respect. This is a test from Almighty as honour and disgrace is in the hands of Allah alone. He gives respect to whomever he wants and humiliates whomever he wants. The inciting innerself gets a lot of self-esteem and comfort from this behaviour of people. At this time, if the seeker starts acting negligently or ignores the commands of the inward and adopt actions only for the sake of fame and respect among people, he will fall prey to hypocrisy.

How to avoid hypocrisy?

In these times, the seeker must hold himself more accountable than before. Along with his deeds he must pay special attention to his inner state. In order to avoid pretence, it is of utmost importance to prioritize inward correction more than outward actions. Remember that pretence is not only the deterioration of the intention before starting the process but also the desire to show off during the process and after the process. In such cases, some seekers make the mistake of revealing these secrets and miracles to the public. The common people begin to consider the seeker very high. They believe that due to their hard work, physical struggle and chants they have reached high levels. The seeker instead of denying himself further discusses how he worked so hard to get it in the most difficult of circumstances and this is how indulges in hypocrisy.

Some disciples are spies, apparently they have worn the cloak of loyalty to the perfect spiritual guide. The purpose of their obedience and struggle is that no one can recognise them. This is pretence. They do not aim for the gnosis and closeness of Allah. Those seekers who abandon sincerity and fall prey to pretence have their inner journey stopped.

Is pretence a major sin in Islam i.e. Faqr?

Sultan-ul-Faqr VI Sultan Mohammad Asghar Ali says, “It has been narrated in hadiths that hypocrisy is a form of polytheism and a polytheist has no relation with Faqr.”

How to get rid of hypocrisy?

The only way to get rid of this dangerous disease of the innerself is to seek the companionship of a Perfect Spiritual guide. His vision and pure companionship gives spiritual strength and eradicates this disease from the being.

Sultan Mohammad Najib-ur-Rehman blessed personality takes people out of the clutches of the innerself, world and Satan and helps in gaining nearness of Allah. He is determined to make the lost umma aware of the true spirit of the religion, i.e. the Faqr of Prophet Mohammad, and to unite the entire umma under this banner.

Sultan Mohammad Najib-ur-Rehman works day and night so no one is deprived of the eternal blessing of Ism-e-Allah Zaat. Moreover he aims to spread the reality of Ism-e-Allah Zaat to every special and common person. Through the invocation and contemplation of Ism-e-Allah Zaat every person is on the journey of purification of inciting innerself, purgation of the inward and manifestation of the soul. This helps in attaining the highest spiritual levels of nearness of Allah, gnosis of Allah and Mohammadan Assembly. Join today, the company of the Perfect Spiritual guide to get rid of the dangerous esoteric diseases like pretence.

This is an English translation of the Urdu article ریاکاری. Which appeared in the July 2021 issue of the Mahnama Sultan ul Faqr Magazine. Mr. Waseem Asif Sarwari Qadri wrote the original article. Abeeha Malik Sarwari Qadri has translated it in English.