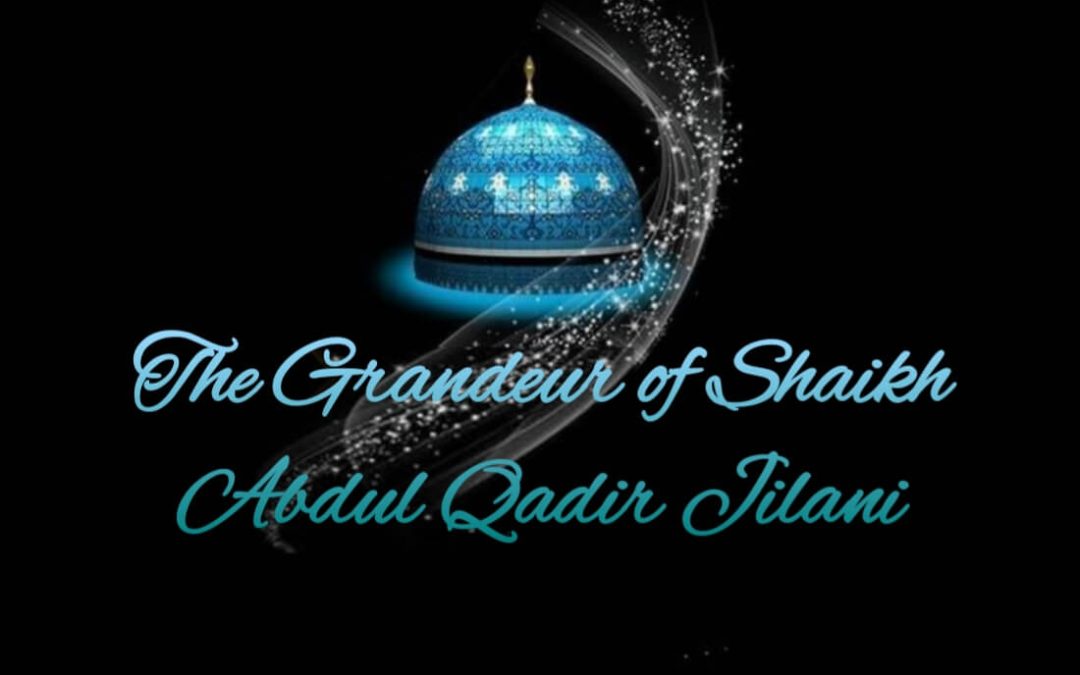 It is narrated that Shaikh Sayyid Abu Saleh Musa Jangi was very pious and upright person. During his youth, one day, whilst walking on the way, he ate an apple lying at river bank. Later on he thought it may have belonged to someone.

He went in search of the owner and he found an apple garden at a distance. He asked for forgiveness from the garden’s owner Shaikh Abdullah Somyee. The owner set a condition for forgiving this offence that Shaikh Sayyid Abu Saleh must look after the garden for a certain period of time which he accepted.

At the end of the agreed duration, he asked for release but then the owner of the garden asked him to fulfil one more condition. The owner asked him to marry his one and only daughter who according to him was blind, deaf and handicapped from hands and feet.

He said, if you fulfil this condition, I will forgive your offence completely. Sayyid Abu Saleh agreed to this condition as well. At last when he saw his newly wed wife, he found that not only she was free from stated defects but also she was immensely beautiful. He thought that this may be a different girl as she does not match the description.

He went to Shaikh Abdullah Somyee and told him the situation. Shaikh Abdullah said the qualities I described where true but what I meant was something else. She is such that she never saw a stranger, neither she talked or heard a stranger nor she ever transgressed the boundaries of sharia. She never went out of her house as well. (Seerat-e-Ghaus al-Thaqalain).

The boy who was born in house of this pious couple is someone whom the world knows by the title of Shahbaaz-e-La Makani, Qutb-e-Rabbani, Ghaus-e-Samdani, Peeran-e-Peer, Dastgeer Muhiyuddin, Ghawth al-Azam Shaikh Abdul Qadir Jilani (ra).

He is the one whom Allah gave the highest rank of Sainthood in the umma of Prophet Mohammad (pbuh). He was born in a small town of Iran called Jilan on the auspicious day of 1st Ramadan 470 AH (i.e. 17th Mar 1078) on Friday. That is the reason he is also called Jilani.

Syedna al-Ghawth al-Azam Shaikh Abdul Qadir Jilani is Syed from both paternal as well as maternal side. From paternal side his lineage reaches Ali ibn Abi Talib through 11 steps. Whereas from maternal side it reaches him through 14 steps.

The lineage of Sayyidna al-Ghawth al-Azam Shaikh Abdul Qadir Jilani from paternal side is as follows: The lineage of Shaikh Abdul Qadir Jilani from maternal side is as follows:

On his auspicious birth, the Beloved Prophet of Allah (pbuh), along with the Companions, Imams and accomplished Saints, gave good news to his father. Allah has granted you a righteous son, he is my beloved and beloved of Allah Almighty and his rank is high among all saints and nobles. (Life and Teachings of Syedna Ghawth sl-Azam)

Explanation: The rank and glory of al-Ghawth al-Azam Shaikh Abdul Qadir Jilani amongst the Saints is like Prophet Mohammad pbuh amongst Prophets and Messengers.

Other Prophets also gave good news to his father: All the saints of Allah will be obedient to your son and his (al-Ghawth al-Azam) step will be on their necks. (Seerat Ghaus al-Azam)

Explanation: Whose pulpit became the neck of the Saints. Millions of salutations on the dignity of this step.

Two hundred and twenty boys were born on the night of the birth of al-Ghawth al-Azam and with his blessing, they all became saints.

Shaikh Shahabuddin Suhrawardi has written in Manaqib Ghausia: On the night of the birth of Shaikh Abdul Qadir Jilani, about eleven hundred boys were born in Jilan province, all of whom succeeded to the rank of Sainthood.

Life and Teachings of Syedna Ghaus-ul-Azam

At the time of his birth, Islam was facing a very difficult time. There was no sign of morality, corruption was rampant. There was chaos everywhere. Corruption, debauchery, political corruption and moral degradation had reached their peak. Along with religious decline, the spiritual situation became worse. The spirit of religion had ended. In such circumstances, Allah revived the religion through Shaikh Abdul Qadir Jilani. Spiritual values rose, a revolution took place and the golden age of spreading Islam began. On this basis, he became famous in the world with the title of Mohiyuddin (meaning the reviver of religion). It is written in Bahja-tul-Asrar, once Shaikh Abdul Qadir Jilani gave an explanation about his title “Mohiyuddin”. He said:

“On a Friday in 511 AH, I was returning to Baghdad from a journey. I saw a sick person. He said, ‘Peace be upon you, O Abdul Qadir!’ I answered the greeting. He said, “Pick me up.” I picked him up, then sat him down. As soon as I touched him, his face brightened and his body recovered from the weakness. I was amazed to see that. He said, ‘Don’t be surprised, I am the religion of your forefather (Prophet Mohammad) and I was slowly dying. However, Allah has given me a new life through you. You are Mohiyuddin’.”

He went on to say:

When I entered the boundary of the mosque, a man came to me, took his shoes off and put those on my feet and addressed me as, ‘Ya Sayyedi Mohiyuddin’. Meaning ‘O my lord Mohiyuddin’. After the Friday prayers, people flocked toward me. They addressed me with ‘Ya Mohiyuddin’ and kissed my hands. No one had called me with this title before that. (Zubda al-Athaar Talkhees Bahja tul Asrar)

The purity and sanctity that the souls of other Saints have, the body of al-Ghawth al-Azam has that level of purity. Therefore, his grandeur is unique and above all Saints. He is the leader of all Saints. All the seekers of Allah attain Sainthood through his medium.

When the caliphate of Prophet Mohammad (pbuh) reached Ali ibn Abi Talib, from him a number of offshoots in the form of spiritual orders spread. The Sainthood has never been and will never be separated from the lineage of Prophet Mohammad. No one has ever reached Sainthood without their benevolence. Allah made Mohiyuddin Shaikh Abdul Qadir Jilani the reviver of Islam. Although, Mohammadan light manifests through every descendant of Prophet Mohammad. However, it manifests in a unique way through al-Ghawth al-Azam Shaikh Abdul Qadir Jilani. He is indeed the complete embodiment and manifestation of Mohammadan light (Noor-e-Mohammad). (Akhbar ul Akhiar)

Prophecies of prior Saints about Shaikh Abdul Qadir Jilani

Once, someone asked Shaikh Aqeel Sanji: ‘Who is the Qutb in present era?’ He replied, ‘The Qutb of this era is residing in Madina under cover. No one knows him except the Saints’. Then he pointed towards Iraq and said, ‘A non-Arab young man will rise from this side. He will deliver sermons in Baghdad. Everyone will manifest his miracles. He will say: ‘My foot is on the neck of all the Saints’.

It is narrated in Salik al-Salikeen:

When al-Ghawth al-Azam had been honoured with the rank of al-Ghawth (a very exalted level of Sainthood). One day when he was delivering sermon he went into a state of transcendence. During that state he said: ‘My foot is on the neck of all the Saints’. A voice from the hidden called that all the Saints must obey to al-Ghawth al-Azam Shaikh Abdul Qadir Jilani. Upon hearing this, all the Saints whether alive or those who had passed away lowered their heads in respect and as a sign of affirmation. (Zubda al-Athaar Talkhees Bahja tul Asrar)

Shaikh Abdul Qadir Jilani’s saying My foot is on the neck of all the Saints doesn’t only indicate that his rank is exalted over all other Saints but it also means all the other Sufi orders receive beneficence from his Sufi order i.e. Sarwari Qadri order. Moreover, this also means that with the permission and blessing of Prophet Mohammad (pbuh), al-Ghawth al-Azam Shaikh Abdul Qadir Jilani is the heir of all the treasures of Faqr and Sainthood. Without his blessing and permission, no one can gain any rank of Sainthood. (Hayat o Taleeman Syedna Ghaus al-Azam)

Explanation: O al-Ghawth al-Azam! Your grandeur is exalted over every Saint. Who knows your rank and grandeur? Even the Saints of highest rank kiss your feet.

Although it is impossible to adequately describe the grandeur of al-Ghawth al-Azam Shaikh Abdul Qadir Jilani in words. However, Sultan Bahoo (ra) has described his grandeur in his books. He says:

A Murshid (spiritual guide) needs to be like my Murshid i.e. Shaikh Abdul Qadir Jilani. With his single glance, he blesses thousands of seekers with the gnosis of اِلَّا اللّٰہ i.e. there is none other than Allah. And for some, he blesses them with presence in Mohammadan assembly.

Explanation: The disciples of Shaikh Abdul Qadir Jilani are never deprived. Those who have a tiny bit of Divine love in them, they always remain restless for Divine vision. And in order to achieve that, they are ever ready to make any kind of sacrifice and face all the troubles on this path with patience. Only those succeed in this world and hereafter who invocate and contemplate Ism-e-Allah Zaat (The personal name of Allah). (Abyat-e-Bahoo Kamil) No one can ever adequately express the grandeur of Shaikh Abdul Qadir Jilani. Every Saint attains Sainthood through his benevolence, regardless of how high they progress inwardly. Every Saint knows his grandeur. Fourteen Sufi orders began from Imam Hasan al-Basri. However, with time they weakened and lost their strength. Shaikh Abdul Qadir Jilani re-organised all of these. Hence, from him, four Sufi orders began. These are Qadri, Chishti, Suhrawardi and Naqshbandi. He is the leader of all these orders. Out of these, Qadri order belongs to him. Allah has blessed him with complete authority over everything.

In this regard, Sultan-ul-Arifeen Sultan Bahoo says:

“Whoever is a denier of Shaikh Abdul Qadir Jilani is irreligious and unfortunate.  (Kaleed-ul-Tauheed)”

Regarding the enemy of Qadri order, Sultan Bahoo says: The enemy of the Qadri order is not devoid of three wisdoms; first he is rejected and hypocrite, second he is a disbeliever, thirdly he is imperfect, false and jealous. (Nur-ul-Huda)

May Allah Almighty grant us the ability to fully obey the teachings of his spiritual successor Sultan ul Ashiqeen Sultan Mohammad Najib ur Rehman through the medium of Shaikh Abdul Qadir Jilani (ra). Ameen.

Who is Shaikh Abdul Qadir Jilani?

Ghaus al-Azam Shaikh Abdul Qadir Jilani is the leader of all the Saints. He is from the lineage of Prophet Mohammad (pbuh). His spiritual rank is so exalted that he said: ‘My foot is on the neck of all Saints’. No one ever has or ever will attain Sainthood without his benevolence. His glory among the Saints is like Prophet Mohammad (pbuh) is among Prophets and Messengers.