The initial shrine Sultan Bahoo was located in Fort Qehrgan at the western bank of Chenab River, Shorkot, Pakistan. It remained there for 78 years i.e. from 1102 Hijri till 1180 Hijri (1691 AD-1767 AD). When Jhanda Singh and Ganda Singh captured Lahore, descendants of Sultan Bahoo migrated to different parts of Punjab. Only a few dervishes and khalifas remained in shrine Sultan Bahoo. In 1180 Hijri (1767 AD) Chenab River sank down the fort which fell afterwards. The river reached the graves. Dervishes and khalifas took out the other coffins and saved them in boxes but it was as if the coffin of Sultan Bahoo had vanished. They started crying in disappointment. Sultan Bahoo spiritually told them, “My coffin will surely be found, a man who is worthy of touching my body, will come here tomorrow morning at dawn. He will take out my coffin, river water will not reach my grave till then.”

Dervishes were now satisfied and they started waiting for this supernatural incident to happen. Next morning, a man with a green veil appeared at dawn. He did not remove the veil and instantly took out the coffin of Sultan Bahoo from the ground dug by the dervishes and khalifas. Thousands of people gathered around and had the privilege of seeing the sacred body of Sultan Bahoo as fresh as alive, water of ablution was dropping from his sacred beard. When the coffin box opened, an exotic fragrance spread through miles. Many people present there became ecstatic and frenzied.

Sultan-ul-Faqr VI Sultan Mohammad Asghar Ali once said while talking about this incident, “That veiled person was Sultan Bahoo himself.”

In Samandari, a small town near Chenab River, there was a boundary wall of a mansion near the well of Peeple. Whoever entered the mansion, fainted, even the cattle and other animals could not enter it. People had left that area out of fear. That mansion was sacred, Sultan Bahoo ordered his khalifas to make his shrine in that mansion near the well of Peeple, as that place was near the old shrine and was earmarked for his new shrine. Hence, the dervishes built shrine Sultan Bahoo in the centre of the mansion. Instead of burying the coffin in the ground, the khalifas placed it on the ground and made the shrine on it. The new Sultan Bahoo shrine remained there for 157 years i.e. from 1180 Hijri till 1336 Hijri (1767 AD-1917 AD).

However, since Allah has sent Sultan Bahoo as the benefactor for every age, for every Muslim and non-Muslim, fortunate and unfortunate, and also as the true successor and the representative of Prophet Mohammad in this materialistic age to guide the people on the Straight Path, so his shrine had to be saved.

Sultan Bahoo came in the dream of Sultan Dost Mohammad and advised him to dig the place of the grave deeper. Next day, when people dug the said place, the signs of the coffin started appearing. When the earth was dug deeper, gusts of fragrance spread in the air. That fragrance was out of this world. At last, found was the coffin of Sultan Bahoo but it had become impossible to stay there due to the extreme fragrance. No one could stay inside the shrine for more than fifteen minutes. With much difficulty, people took out the coffin. This fragrance was so lasting that it did not leave the dresses of those workers even when the dresses got old and torn. Hence, the coffin of Sultan Bahoo was taken out before the 10th of Muharram, 1336 Hijri (October 1917) and kept safe.

The construction of the present shrine began at a distance of one mile to the north-western side of the old shrine. In 6 months’ time, the new shrine, the mosque and the closets around the mosque, were ready. On Friday, April 1918, people buried his coffin in the shrine.

The present day shrine Sultan Bahoo is in a populated area. The city of Garh Maharaja is at a distance of two miles from the shrine, Ahmadpur Sial is in the south. In the east, there is the city of Shorkot across the Jhelum and Chenab River. The Muzaffargarh Road passes at a distance of 1.5 miles towards the west of the shrine. Nowadays, access to the shrine is very easy because of the concrete road. The pilgrims from Ahmadpur Sial and Garh Maharaja can easily approach the shrine.

Lacs of seekers of the Divine Truth benefit from shrine Sultan Bahoo. In addition, it is a famous miracle of the Darbar Sultan Bahoo that as soon as one enters it, tears start rolling from one’s eyes. This shrine is a source of beneficence for the whole world. Moreover, the wishes of thousands of seekers and lovers of Allah meet their fulfilment here. Furthermore, thousands of people have Divine experiences and many of them have reached the level of spiritual guide by the spiritual attention and by the grace of beneficence of Sultan Bahoo shrine. There are lacs of known miracles of this shrine.

Additionally, his shrine is free from any kind of wrong innovations. Hundreds of mystics remain in seclusion there for attaining vision of Allah. Once entered in the shrine, one does not want to come out of it. The seekers of the Divine Truth and Reality never return empty handed from this shrine.

Meaning: Fakirs are actually those true and spiritually elevated mystics who are alive even after death and benefit people from their shrine.

The sacred Urs of Sultan-ul-Arifeen Hazrat Sakhi Sultan Bahoo is celebrated every year on the first Thursday of Jamadi-us-Sani at darbar Sultan Bahoo Jhang. People come from far off places to join the celebrations at the location of Sultan Bahoo shrine.

Sultan Bahoo extremely loved the Sacred Family of the Holy Prophet. He used to hold the Urs of the martyrs of Karbala every year in Muharram from 1st to 10th. This tradition continues. Thousands of pilgrims visit the his tomb during the first ten days of Muharram, while in the last three days their number reaches to lacs at darbar Sakhi Sultan Bahoo. In this way, two vast congregations are held every year at his shrine, where many people receive spiritual beneficence. 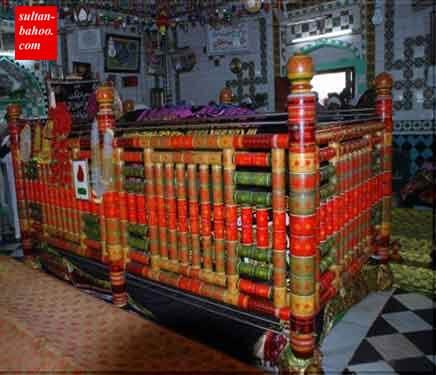