How to find Allah Indeed We offered the Trust to the heavens and the earth and the mountains,
but they declined to bear this and felt scared of it, but man took it on. Verily he is ever so
cruel (towards his innerself) and ignorant (of his highest rank near Allah). (33:72)

Representation or deputation denotes khilafat or succession and the heir of succession is called successor.

Someone’s heir or replacement is also called a successor. In Islamic diction a person is called a spiritual successor whom Allah has chosen among people and is made a ruler or a leader. As the Quran says:

Adam – The First Vicegerent of Allah

Spiritual Succession was transferred to Adam and became the one to be prostrated. Allah blew His own Soul into Adam and granted him all the knowledge of His Names. About what He said in the Quran.

All the knowledge of Divine Names was also transferred to humans. Sultan ul Ashiqeen Sultan Muhammad Najib ur Rehman says in this context.

Divine soul is the best creation among all. It is the matter or essence of the souls of entire creation but it is present and manifest in man in its ultimate and perfect form. That is why man is called Allah’s deputy, vicegerent or representative.

The heavy trust which the sky and earth had not the courage to bear, the mountains could not bear it’s weight, not only the sky even its inhabitants did not have the capability to carry  but man carried it and that heavy trust is the manifestation of Existence. It means only the universal Divine Man is the possessor of Divine Existence or the manifestation of Divine Essence along with Divine names and attributes.

When Allah appointed Man on the rank of His deputation and representation, it became a belief that he got the right to have authority over everything in the universe. It means Allah granted the Man authority to persist and run the universe keeping it in motion in light of knowledge of Divine names.

This is the very authority of His deputation that Allah proclaimed in the Holy Quran that it is His Trust. In which form this Trust was received?

To Mystics, Divine Trust is “Ism e Allah Zaat” which is a Divine light as is the saying of Allah.

Allah (Ism e Zaat) is the friend of believers that takes them out of darkness, paganism, hypocrisy and polytheism. It takes them towards the light of Oneness (the straight path).

It means man saw Allah in His light. The same light He wrapped and kept in pure curtains in his inward.

I was a hidden treasure, I wanted to be recognized so I created the creation.

This hidden treasure means Divine Essence along with Divine names and attributes. So what was that which paved the way to manifest the hidden treasure and create the entire universe? It was the passion of love with which man was created and the whole universe came into being. To carry this heavy Trust of love Allah said.

“Who is the one who would hold the heavy Trust of My love”?

Except the human souls, every creation showed inability and declined to carry the heavy weight of the Trust because the Trust of Divine love was not an ordinary one. (Haqiqat Ism e Allah Zaat).

Man is the best Creation of Allah

Generally, all the human beings are the representatives of Allah, some are common but some representatives are chosen who are called Prophets and Messengers. The special representatives are selected by Allah Himself without any human interference.  The common representation is limited to the person’s self and his family. Allah made human beings best and distinguished among all other creations. Being attributed with Allah’s granted authority, being prostrated by the angels and conquering the universe are the reason or logic that Allah has conferred man with the knowledge of those attributes which are not granted to other creatures in the universe.

All this knowledge is only gained when one gets familiar with the knowledge which Allah called His Trust. Such Trust is only granted to man. This is the Trust due to which man is vicegerent of Allah. He who is the deputy or vicegerent of someone, possesses the latter’s authority. Allah is the Creator, Allah’s personal authority is creative. When man was appointed His deputy on the earth, he was transferred His creative authority too. The group of such men who implement their creative authority are called the people of cosmology.

As different departments and ministries are constituted to run the government and system of the world. Similarly Allah has also established systems to run the Universe. It is called cosmology. When we ponder over the wisdom of cosmology, it comes under discussion, how the universe came into being.

The first stage of the universe came into being without any involvement of resources and this stage is called initiation. It is the beginning as well as the first phase of the universal system. Thus when Allah said “Kun” (be), the universe came into being. When the forms and shapes, action and rest took place in the physical world and life started hence the second phase began. This level was called creation. Third phase is planning in which all the actions and steps of life of physical objects were arranged. Fourth step or department is destiny in which all the   decisions and fortune according to the administrative matters among the individuals were established.

There are different ranks of cosmology, some of them are as below:

These people perform cosmological matters according to their knowledge and ranks (Baran e Rehmat).

It is related from Anas bin Malik,

“Prophet Mohammad pbuh said that in his umma forty Abdals would always remain present i.e, twenty two in Syria and eighteen in Iraq. Whenever one of them dies, another will be appointed as Abdal from the creation. This chain will continue till the Doomsday. The number of Abdals would never be less than forty. When the Doomsday would be approaching, they will be raised from the world at once. Apart from them there are 356 Mystics in the world who are ever present in every era. No era would ever remain void of them. Among them three hundred are Abtaal and forty are Abadals. Seven Siyaheen, five Otaad ,three Qutb and one Ghaus.

Earth is Never Void of Mystics

Hence the number of such kind of Mystics never decreases anytime from three fifty six. Although during calamities and catastrophes this number is increased. Among them first three hundred Mystics are highly ranked and called Abtaal in mystical terminology. They have falsified lustful and sensual way. Secondly forty Mystics are called Abdaal who have purified morals and souls. Third are seven in number and are called Siyaheen. Their duty is to roam around the world and help and guide people on Allah’s will. They remain busy in this job all the time. Among the mentioned three hundred forty Seven Mystics no one is appointed at the throne of persuasion and instruction. There are nine others who are the people of instruction. They become humble and down to earth under the burden of theophanies of Divine Essence and attributes and Allah repeatedly demotes them for their perfection and accomplishment, due to which their status remains fluctuated.

The successor of Prophet Mohammad pbuh is the exact and real heir of his heritage, Faqr.

He is the possessor of Divine Trust, the head of his spiritual order, the leader and the Sultan of his time.
Prophet Mohammad pbuh is the total authority of the treasure of Faqr. The one who is transferred the Trust of Faqr or the Trust of Divine Essence, he is appointed at the rank of:

Meaning: When Faqr is accomplished that is Allah.

Sultan Bahoo (ra) called such possessor of Divine Trust as Sahib e Mussama (the one who possess attributes of Divine Essence). Such Man is annihilated in Allah and immortal Fakir (the Universal Divine Man), who is appointed at the throne of instruction and guidance. He is the one who is a perfect spiritual guide appointed by Allah to grant Ism e Allah Zaat.

Sultan ul Ashiqeen Sultan Muhammad Najib ur Rehman says in this regard:
Sahib e Mussama is that perfect Fakir who is complete embodiment of Divine attributes and Divine Essence. In other words it is that seeker or disciple who is the complete manifestation of his spiritual guide. In fact, his spiritual guide manifests through his being. This means the disciple whom his spiritual guide transfers the Divine Trust. He is only one in his time and manifests every time in a new place according to the glory of the era. He is also called superior spiritual successor in mysticism. (Shams ul Fuqra) 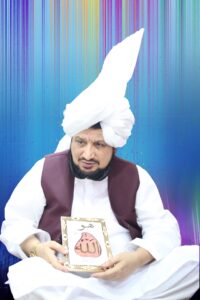 Sultan ul Ashiqeen Sultan Muhammad Najib ur Rehman is the superior spiritual successor of the 6th Sultan ul Faqr Sultan Mohammad Asghar Ali. 21st March 2001 is that wonderful day in the history of Faqr when Sultan ul Faqr 6th Sultan Mohammad Asghar Ali transferred Sultan Mohammad Najib Rehman the Divine Trust. He is the spiritual heir of Sultan Bahoo, Perfect Fakir and spiritual guide of the present era. He is the Sun of Faqr and granting the Muslim umma the beneficence of Faqr. Whoever walks on this way gets onto the righteous path that leads to the love of Allah and His gnosis.

May Allah shower His blessings upon our spiritual guide and extend his life so he may continue to spread the beneficence of Allah’s recognition, gnosis and Divine love to the seekers.