Love and Reverence for the Righteous Love and Reverence for the Righteous

Every human has love in its existence, love connects man to Allah. Allah has adorned all the realms with His treasures in the love of his creation. It is only His love that even if he commits many sins, when he bows before Allah, Allah does not see his sins but He just takes him under His kind gesture. Hence Allah’s love is boundless and immeasurable, His blessings are countless.

Hence the foremost deserver of the love of the man is Allah and is the sign of his faith. Allah says:

Even a little particle of Divine love is better than gaining excellence in jurisprudence and the devotion of seventy years because only by virtue of Divine love a seeker becomes confidant of the secrets of the Divine Oneness and Lordliness. While the arrogance created due to excessive knowledge and devotions deprives one of these blessings. (Ain-ul-Faqr)

(O Beloved!) say: ‘If you love Allah, follow me. Allah will then take you as (His) beloved, and forgive your sins for you, and Allah is most Forgiving, Ever-Merciful.’ (3:31)

None of you will have faith till he loves me more than his father, his children and all mankind. (Sahih-Muslim)

“I am from the Nur of Allah and all creation is from my Nur.” (Haqeeqat-e-Mohammadiya)

Allah says in the Holy Quran:

“One who loved the Prophet Mohammad, in fact loved Allah”.

Amongst all the creations, the love for Prophet Mohammad of the sacred Companions is the most elevated one.

Once someone asked Ali Ibn Abi Talib: How much you love Prophet Mohammad?

He answered: “I love him more than my money, children, parents and even cold water in the summer.” (Seerat-Ibn-e-Hisham)

Reciting creed and feeling the ardent Divine love is the love of Prophet Mohammad. Why would the love not be whilst everyone knows that only Prophet Mohammad is the door of beneficence, the helper and the benediction of Allah.

He calls us ours, love should be like this.

He places us in his eyes, beneficence should be like this. 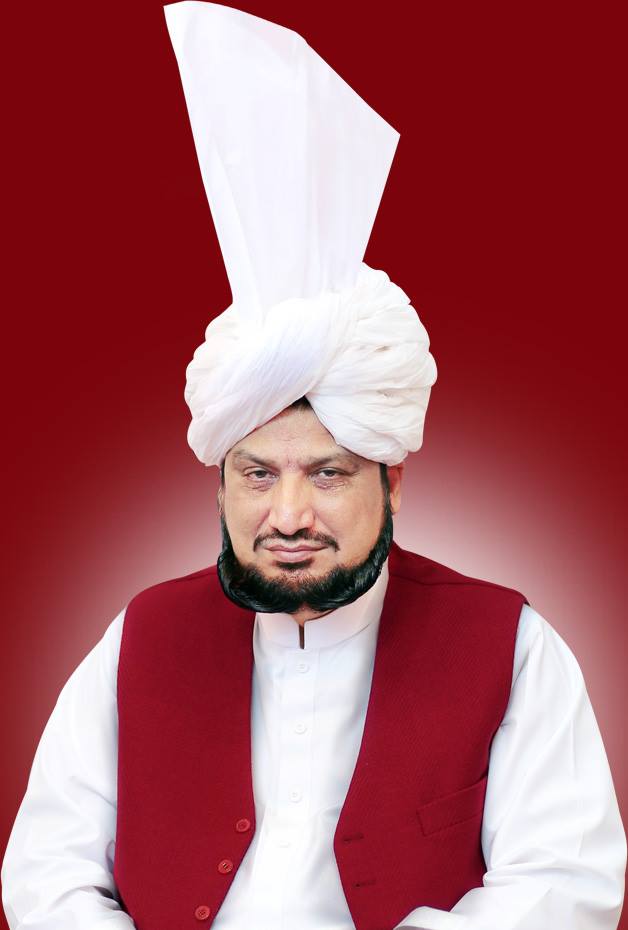 LOVE FOR THE PEOPLE OF CLOAK

After the love of Prophet Mohammad, the most deserving ones of the love of the humans are the sacred Companions. A little bit of mistrust towards the People of Cloak can waste the devotions and prayers. One can become a living example of a man with dead inward.

Say: I do not ask for any recompense for this (preaching the faith in prophet hood), but (seek) love for (my) kindreds (and Allah’s nearness). They are absolutely pure

Meaning: Allah only intends to remove rijs from you, O People of the Cloak (of the Prophet, [even a doubt]) and make you absolutely pure and clean by blessing you with (perfect) purity and wholesomeness. (33:33)

The Prophet covered all of them with his cloak and looked towards the sky and prayed twice, “O Allah! They are People of Cloak, they belong to me and purify them from all impurities.”

Love them for Allah

Man will be with that person in paradise whom he loves

Hating them will throw man in hell

“A little bit of mistrust against the sacred People of Cloak, deprives even a great virtuous person from grand levels.”

LOVE FOR THE EXALTED COMPANIONS

When it comes to the topic of loyalty, sacrifice of life and love and reverence then the most exalted and elevated level is only of the sacred Companions. Nothing is a great example other than these pure ones in the account of love and reverence.

They were annihilated in Prophet Mohammad perfectly

“Companions had the honour to remain in the company of Prophet Mohammad. They not only accepted Islam but also sacrificed all of their belongings to spread Islam in the world. Companions are the first lovers of Prophet Mohammad and thus they have superiority over all the ummah. They are the sacred souls who stood along Prophet Mohammad during hardships and remained steadfast in all trials. They are such exalted personalities who were annihilated in Prophet Mohammad in such a way that they had become his perfect reflection.

The greatest honour for Companions is that Allah has expressed His pleasure for them in the Quran.

Meaning: Allah is pleased with them, and they are pleased with Him. This (pleasure of Allah) is the highest achievement. (5:119)

None has a status equal to them

The family of Prophet Mohammad is a source of comfort

Abu Sa’id al-Khudri relates that Prophet Mohammad said, “The most special for me is my family who is a source of comfort for me.” (Tirmidhi 3904)

Fatimah is the leader of the true believing Muslim women

They love Prophet Mohammad more than their family

Once Prophet Mohammad sent Zayd bin al-Dathinnah and a group of Companions to the tribe of Uzal Waqara (who had accepted Islam) to preach them but the tribe deceived them. Safwan ibn Umayya brought Zayd so that he would be killed instead of his father, Umayya ibn Khalaf. He brought him at maqam-e-tan’eem outside the haram.

When the preparations of his killing were done, Abu Safwan asked him by the swear of Allah that “O Zayd Do you prefer that on this occasion Prophet Mohammad would be on your place and we would kill him and you stay with your people? He answered “I swear upon Allah! I don’t even like that if Prophet Mohammad is sitting at a place and a thorn prick and hurts him and I stay with my people.” Abu Safwan said “I haven’t seen any person to love someone as much as the sacred Companions do” (Sirat-Ibn-Hisham)

Hence the love of the sacred Companions is the guarantor of every person’s faith and falsely thinking about them is absolute doom.

Cursed is the one whosoever speaks bad about them

Their enemy is the enemy of Allah

LOVE AND REVERENCE FOR THE FAKIRS (THE UNIVERSAL DIVINE MAN)

Fakirs are loved by Allah

Meaning: Whosoever looked towards a Fakir (with respect and devotion) and listened his words (i.e. followed them), Allah will raise him with Prophets and Messengers on the Doomsday.

Verily love of the Fakirs (the Universal Divine Man) is compulsory upon the believers and one should protect himself from the hatred against them.

Disrespecting them is a complete disgrace

“Whosoever respected the rich and disrespected the Fakirs (the Universal Divine Man) is disgraced in both the worlds.”

Sultan Bahoo says about the enemy of Fakir (the Universal Divine Man):

Their presence is the favour of Allah

The sacred presence of the Fakirs (the Universal Divine Man) is the giver of life to the worlds. A dead inward is enlivened by just their spiritual sight. It is verified by the incident of Musa and Khidr. When Khidr was staying at “Majma’a Al-Bahrain”, a fish enlivens and jumps into the water from the plate of Musa. This incident proves that where he was staying, that place was enlivened. (Shan-e-Auliya)

HOW TO RECOGNIZE THE FAKIR

Now a question arises that in this era of chaos where we can find a Fakir?

“The spiritual guide who does not grant the invocation and contemplation of Ism-e-Allah Zaat, that spiritual guide is not the eligible for holding the throne of Divine Guidance and persuasion.” (Nur-ul-Huda-Kalan)

He is the exact reflection of this hadith

The spiritual guide and possessor of Divine Trust is Sultan-ul-Ashiqeen Sultan Mohammad Najib-ur-Rehman. His sacred self is exactly the reflection of this Hadith:

He grants the invocation and contemplation of Ism-e-Allah Zaat

Sultan-ul-Ashiqeen grants the invocation and contemplation of Ism-e-Allah Zaat to the seekers of Allah. It is his spiritual beneficence that even the common seeker if does so with a sincere heart, gets granted with the closeness of Allah and the presence in the Mohammadan Assembly. Therefore, it is compulsory upon every seeker to search for the spiritual guide and instil his love and reverence to get the closeness of Allah and complete his faith.

Meaning: The Throne is under the steps of the perfect spiritual guide, sit there reverently, it would reveal upon you the complete gnosis of Divine Oneness. (Qurb-e-Deedar)

LOVE AND REVERENCE FOR THE FAMILY OF THE FAKIRS

They are the closest ones

The progeny of every spiritual guide is not worthy of reverence

Here, it is compulsory to know that the progeny of every spiritual guide is not worthy of reverence because the irony is that in this era of chaos after the death of the spiritual guide, those people of his family who are not familiar of Faqr, they do not have the courage to sacrifice everything for the spiritual guide and cannot leave the desires of the innerself, make the name of spiritual guide their business and loot innocent people. This progeny should not be followed.

Anyone who does not follow Prophet Mohammad completely and declares himself a spiritual guide or leader just because he is the son of a Shaikh, he is depraved as well as the depraver. (Kashf-ul-Asrar)

Only the lover of Allah loves the righteous and the one who denies any of them is the liar and disgraced in both the worlds. That man doesn’t love Allah rather loves his desires because whoever his innerself loves he accepts that and when his innerselves are hurt he leaves them.

Meaning: Whosoever wants to have the closeness of Allah should have the company of the lovers of Allah.

Benefitted from the book: